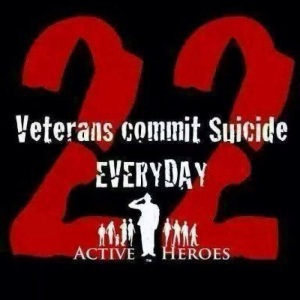 I met a wonderful woman in the isles of a local store, when she asked me to help her find something. Somehow the subject of PTSD and her nephew came up. (It always seems to be a stranger in the isle of a store where we break down and spew out whatever.)

This lady, I’m guessing in her 80’s, was afraid he might commit suicide. “When he returned from war, he was a different person,” was the comment she made. I told her that anyone who has been to war, been injured in war, or seen their friends die, will be forever changed.

This concerned woman had found an ear in me, she desperatly needed to tell this story, and in the middle of a store isle is where she opened her heart to a stranger. A stranger who was grateful to have the opportunity to listen.

A couple of months after her nephew returned home, she saw him at a family gathering. He was elusive, and quiet. She saw him go out the door, so she followed him. He was sitting on the steps of the front porch with his head resting on his folded arms, so she sat down next to him. As they sat there, after a few questions from her, this young warrior began to cry while he told her of the horrible images that haunted him.

Just by listening, making herself available, this aunt made a difference in the life of a warrior, her warrior. She made sure his father knew of that conversation, and told him to start listening. “Don’t ever give up on him,” was what she told her brother.

If only all our returning warriors had someone they could talk with, someone who will never give up on them. Maybe the suicide numbers would be less.

How many of us have said, “If only,” while attending a funeral, reading the newspaper, or watching the nightly news, when it comes to the suicide of a young warrior?

This is not acceptable! We must find ways to help and prevent these family and friends of ours from losing this fight. This fight that has consumed them because they went to war so we could remain safe.

They gave, so why would we not give back? Open your hearts, listen, help a warrior find the help they need. Can you help lower these numbers? Yes, we all can.

No more “What ifs,” would be a wonderful world to live in! Help lower these numbers, one warrior at a time, please…