I have not met one single warrior who has come home from war and accepted the title of “HERO.”  Even though they have been through tremendous pain and suffering from injuries, or suffered from the emotional scars of PTSD, they still do not like being referred to as heroes.

It took me a while to understand why, when my son came home from war wounded, he had a kind of discord to this word when it was applied to him.  You could see him physically tremble, when this word would come his way.  He refers to the scars he will always carry as badges of honor.  And at the same time, he says they feel like he is wearing a heavy coat every single day.  He can not feel the touch of my hand on his burn-scarred arms, unless I apply enough pressure to push through the scars to the muscles that remain.  It’s so sad when a mother’s touch often times cannot be felt…

Why–we all wonder–do our warriors not feel justified in holding this title they have all so willingly fought for.

The answer is simple–they do not believe there is any such thing as a hero.  Throughout all the wars in the history of our nation, those who fought have never liked this word.  All every warrior believes they have done is to fight for their families–their friends–the one standing beside them–the one behind them.  And this is simply what they believe anyone would do.

Heroes are something we create, to somehow justify the fact that we were not on those battlefields with them.  We believe we are honoring the sacrifices these warriors have made for us.  But it is not the way they want to be honored.

If we want to honor those who have fought, died, and come home wounded, then let us honor them in the way they want–for what they fought for.

Let us all remember our grandfathers, fathers, partners, and children, as they were and are, precious, courageous, loving souls who took on the job of protecting us and others. 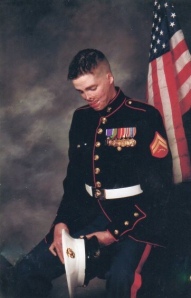